Just got back from an awesome trip. This is the second outing since getting the ProPride. I wanted to share two experiences I had that further cemented my decision to buy the hitch.

As usual the trailer with the ProPride hitch towed incredible. I went up and down several mountain ranges including the Continental Divide. The trailer never even hinted about swaying even in the strong side winds we encountered (more on that later). Then I was approaching a stop light that had just turned green. The speed limit was 55. The light turned red again as an emergency vehicle switched it and then turned its siren on. I had to do an emergency stop. I mean 55 to 0 now. The trailer stayed right behind the truck rock solid. Never felt out of control.

As mentioned earlier, we encountered some stiff side winds (50+). Having driven motorhomes and travel trailers before, I can honestly say it never acted like a travel trailer. The effect of the side winds was more like driving a motorhome. Trailer and vehicle would get pushed as one ( no sway), however nothing as bad as a motorhome. It never required white knuckles or even a hint of concern. However on the same road, we came across another travel trailer on it's top as was the towing vehicle. A guard rail kept them from falling off the cliff. By the position of the vehicles, it was clear the trailer had begun to severely sway, and the driver lost control. Right then I knew I was happy with every penny I spent on the ProPride.

Pro Pride Incorporated gaurantees trailer sway elimination, or your money back. President of Pro Pride, Sean T. Woodruff, has done extensive research about how to safely tow your trailer, and now offers the safest hitch out on the market today. 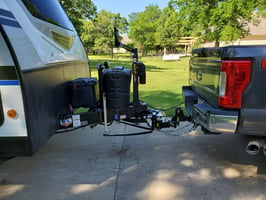 5 Star Review - Comfort and Relaxation with the ProPride 3P Hitch

I used to be an avid camper back in the early 2,000s. I was towing a 12K pound 35’ travel trailer with a Ford F250 diesel and a Hensley Arrow hitch. I remember how comfortable we were when pulling that