Submitted by Arnold and Bonetta Smith

About a year ago we purchased a 32.4’ KZ Trailer pulling it with a F150 super cab 2011 Ford pickup with tow package. The trailer came with the conventional sway bar hitch. After the first trip to Arkansas we were ready to sell the whole thing. The big trucks caused such a sway and suction that it felt dangerous to pull on the interstate. Someone told us about another type hitch that we began researching on line. There were several brands with the basic technology so we called and talked to the mfgs. and compared each one of them. After some time of doing this we focused in on the ProPride hitch 1400. We were provided with very good information and great assistance. We actually had to make a slight adaptation to the hitch for our trailer but all worked out great. We just returned from a trip to west Texas and were more than pleased with the results. No sway or drag from the big 18 wheelers and actually more positive pull control overall. It is much quicker to hook up and disconnect and has a better turning radius . We are very pleased with this hitch and would readily recommend it to anyone. We think now we will keep the trailer.

Find the ultimate in trailer switch control online with Pro Pride Incorporated. We offer you trailer sway elimination with the Pro Pride 3P Hitch.  Buy it online at toady at Read More 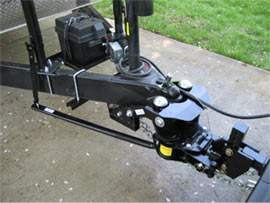